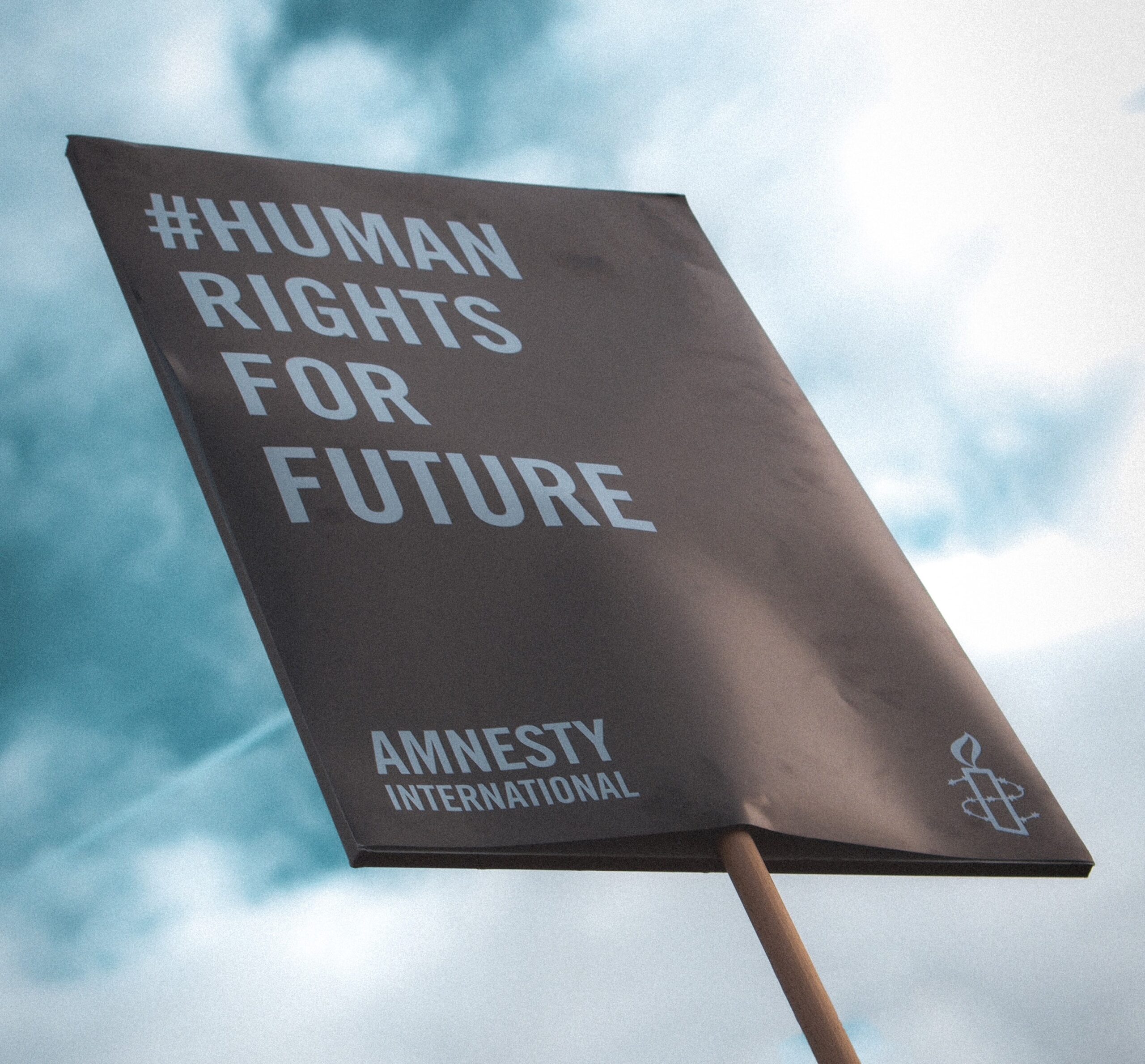 Countries are more than just an amalgam of language and shared memory circumscribed by border posts and held together by a flag and a national anthem.

They are a developing story, written by local people, often with the help of international agencies. The narrative that is being constantly written is not without tension, nowhere more so than in Africa where democracy is still fragile and infrastructure is often decrepit and underdeveloped.

The story of Amnesty International’s work in Nigeria is a classic example of how a book written with Western ink on African paper can often lead to misunderstandings and tensions.

Amnesty International was set up in 1961 with the original goal of freeing prisoners of conscience: people imprisoned for expressing their opinions. But over the years it morphed into an all-purpose human rights advocacy body which seeks to defend the inalienable rights of all, as they were solemnly proclaimed some 70 years ago in the United Nations Universal Declaration of Human Rights.

Like numerous other NGOs it has played an indispensable role in promoting and defending democracy and democratic norms around the world. Such organisations defend the right of freedom of speech, campaign for the abolition of the death penalty, defend the independence of the press, champion women’s rights, uphold the right to peaceful protest, fight for freedom from torture and brutality, combat discrimination, defend refugees and migrants’ rights and generally represent a force for good in society.

In Nigeria, they have used their international reputation and power to counter the various anti-democratic tendencies of successive governments and this effort has been one of the reasons for the survival of democracy in my homeland.

For this, we Nigerians are indeed grateful.

Despite all this, there are some goals of Amnesty which have raised eyebrows around the world and particularly in Africa. For example, their quest not only to legalise prostitution (which they frame as ‘sex work’) but to make it almost acceptable and normal have made many question Amnesty International’s understanding of the 1948 Universal Declaration of Human Rights and of human rights in general.

Commodifying women’s bodies and trying to formalise the sex trade as a legitimate part of the market economy not only dehumanise and reinforce the view of women as sex objects but are  also an affront to the dignity and rights of women which Amnesty International should be seeking to defend. Such endeavours also ignore the realities of how women and girls end up in prostitution in the first place, since most of the sex workers are the same poor, vulnerable, underage, trafficked and abused women which Amnesty aims to protect.

Concerns about Amnesty’s priorities surfaced again recently. Its 2021 goals, shared online at the beginning of the year, seek to make same-sex unions and abortion legal in all countries.

This is a cause for concern for many people in Nigeria and other countries that have laws and customs which affirm and protect the sanctity and inviolability of human life and which define marriage as a heterosexual union. Controversial though this may sound to more liberal countries, our family-focused culture is a source of pride in many African countries, which have deeply rooted religious values.

Soon after the publication of Amnesty’s goals, the Human Rights Writers Association of Nigeria (HURIWA) advised Nigerians to stay away from Amnesty International, adding that their stated objectives are at variance with the constitutional and cultural norms of Nigeria, which in their turn are fully in accordance with international human rights law.

For us Nigerians, Amnesty’s goals to impose law changes in matters that are so contrary to our culture are objectionable and can seem repugnant to local people on many levels.

The use of language is important here. Western terms sometimes do not travel well, and what is described benignly as a right to love or a right to choose in Europe seems merely a euphemism in Africa where there is perhaps greater instinctive revulsion at the idea of abortion and far less support for gay marriage than elsewhere.

Many Africans feel it is not for rich Western agencies to define for us what constitutes a human right, especially as that right is felt to be inimical to our culture and tradition.

As Pierre Manent observed, “The idea of human right was developed in response to real forms of oppression but it is now wielded very aggressively by some with a radical agenda – an agenda that often seems pitilessly indifferent or hostile to longstanding moral traditions and religious beliefs that are still cherished by many.”

Many in Africa object to Amnesty International’s goals because of what is seen as a blindness to local priorities and a growing tendency to ideological colonisation.

In Africa, there are far more pressing matters affecting the majority of people (including those who may be seeking an abortion or identify as gay) that are left unaddressed in Amnesty’s priorities, like lack of access to water, electricity, health, education, jobs, and security.

In Nigeria for example, insecurity, banditry, and the kidnapping of hundreds of school children have become the norm, but this does not seem to interest aid agencies or rich countries in the same way as abortion and sexual orientation interests them.

Thus, public policy is turned on its head, responding more to the issues highlighted by minority groups or Western interests rather than the common areas of concern to the local majority.

This misplaced priority sends a wrong message to the generality of people that they and their concerns don’t matter.

Abortion and issues of gender and sexual identity are front-burner issues in the West which not only attract attention but lots of funds. Just recently, the Biden Administration affirmed that issues of sexual orientation and gender identity are a key foreign policy priority, and it is ready to use ‘the full range of diplomatic and assistance tools and, as appropriate, financial sanctions, visa restrictions, and other actions’ to achieve it.

From our perspective in Nigeria, this excessive interest in these causes does great harm. Singling out one minority group in our culture to the exclusion of others simply heightens tensions and resentment and only serves to make acceptance and understanding much harder.

Hard though it may seem for many Western minds to grasp, abortion is a concept that is fundamentally in conflict with our very culture in Africa, where children are so welcomed and celebrated. The very names parents give to their children shows the joy that accompanies childbirth. Hence the mere thought of advocating abortion as a ‘human right’, for whatever reason, is to the great majority of people in my home country unconscionable and a great disservice to women.

Looking at many other parts of the world, we see abortion as the greatest tragedy of our time. For us it is seen as symbolising the worst of a throwaway culture which judges the size, convenience or usefulness of a person before according to that person the fullness of human dignity.

It seems ironic that an organization like Amnesty International which seeks to abolish capital punishment is advocating for the mother’s ‘right to choose’ to end her own child’s life.

Amnesty’s stated aims on the controversial issues of sexuality and reproductive rights need to be revisited if the organisation is to avoid being seen to impose a kind of liberal colonialism on Africa.

It is true that African laws and customs can be improved to treat gay people with more understanding and respect and it is true too that we need to do more to make abortion seem less necessary by offering better support to poor women and those facing crisis pregnancies. But advocating for such changes is not the same as trying to impose a new moral code on a people which sits uncomfortably with their convictions and culture.

To remain relevant and helpful in Nigeria, groups offering international aid should respect our laws, culture and religious beliefs and not seek to impose on us practises which profoundly contradict our core convictions.

Instead of a new ideological form of colonialism, NGOs like Amnesty can work with African peoples to achieve goals which we also desire and believe in: good governance, honesty in leadership and business, and economic and cultural development for all. Rather than Western imposition, this would be seen as a true partnership and a helping hand which we would warmly clasp.