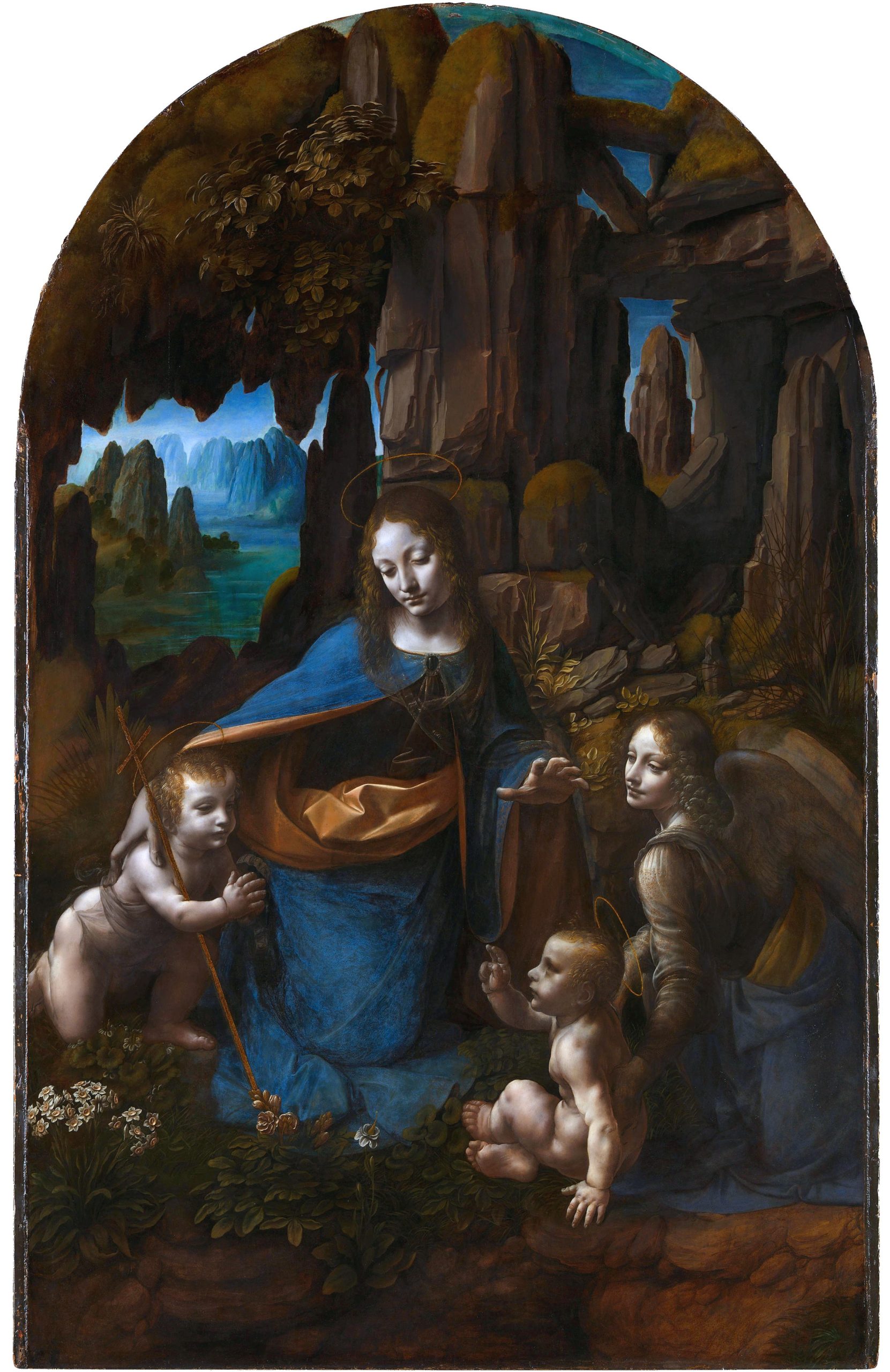 A review of “Leonardo: Experience a Masterpiece” at the National Gallery, London.

This exhibition is a ‘one-work show’. The solitary piece of artwork on display is a masterpiece by Leonardo da Vinci The Virgin of the Rocks (1483–5 c.). With its state-of-the-art, ‘immersive’ technology this exhibition is aimed at introducing a new generation to Renaissance art. The exhibition is priced from £16 – £20 per person and has good concession rates for group bookings (free for members).

There are four distinct spaces to visit with the only piece of art on display situated in the last of the rooms. This creates a sense of anticipation and a longing to see which is quite apt in the joyful season of Advent.

The exhibition begins by taking the viewer on a journey of discovery through the mindset of Leonardo da Vinci. This initial space is filled with a tall, high-tech, cubed metal structure which mirrors the widescreen, virtual reality installation of the Alps.

As a young artist Leonardo was fascinated by his surroundings. He often went into the mountains where he sketched rock formations and drew diagrams of his thoughts and ideas on  the principles of light and shade. Snippets of text taken from his notebooks illustrate his famous mirrored writings. On the other side of the tall metal installation there are more mirrors placed next to the text which gives the viewer the opportunity to try to decipher the secrets of his writings.

In the ‘Studio’, which is the second exhibition space, the viewer discovers how The Virgin of the Rocks was painted. At first glance, however, it is hard to discern whose studio it is as it is cluttered with a vast array of staged props dating from the Renaissance to the present day. The secrets uncovered by the conservation and scientific research teams are reviewed on a video installation which is shaped in the form of the canvas Leonardo used for The Virgin of the Rocks.

In the next room is the ‘Light and Shadow’ show. This is an interactive space where the viewer becomes the investigator, experimenting with the dramatic effects created by the geometrical principles of light and darkness. Leonardo’s revolutionary method is known as ‘chiaroscuro’. The artist also achieved delicate transitions between light and shadow with an original artistic technique, known as ‘sfumato’ – from the verb ‘turn to smoke’.

My friend and colleague Sr Mary accompanied me to the exhibition. We thought that the ‘immersive’ technology was very easy to use. This part of the exhibition was fun. However, it seemed more suitable for schoolchildren on a field trip rather than adults. Thus, we found ourselves eager to get to the ‘Imagined Chapel’ to see the main attraction.

Inside the dimly lit ‘Imagined Chapel’ there is a virtual altarpiece where The Virgin of the Rocks takes pride of place. Gregorian chant was playing at full blast, which Sr Mary found a little distracting.

The altarpiece was dismantled in the 1800s and unfortunately no known records survive of what it looked like in its entirety. The curators, quite imaginatively, have flanked the painting on either side with high-tech video installations which project a variety of moving images to show how the original might have appeared. However, focusing upon the painting itself amidst the noise of the music and the fast array of moving images is quite a feat!

Leonardo depicts the Virgin Mary, with the infant Jesus, St John the Baptist and an angel. The soft smoky shadows falling upon the holy gathering creates a mystical if somewhat eerie scene. Over the right shoulder of the Virgin the viewer sees the distant mountains bathed in cool rays of blue light which contrast sharply with the dark shadowy hues of the cave. The harshness of the mountainous wilderness evokes a sense of a primeval world, before time began.

Utilising modern technology to complement a piece of art from the Renaissance is an innovative idea. It was a courageous and bold move by the National Gallery to mix the two mediums. Did it work here? I would say that this particular experience was more smoke screens and mirrors than an encounter with a classical mystical beauty. However, it was fun in parts and I am sure that schoolchildren will love it.

The exhibition has been newly extended until 26th January 2020